We’ll give you our mug when you pry it from our cold, dead hands.

Another battle in the Culture Wars has begun.  Don’t think only Christmas is at  issue here–that’s what the far left wants you to think, to distract you from the real threat to the American way of life.  The real problem is their adamant stance against National Coffee Day.

At least at Christmastime, staff at Target, Wal-Mart and the rest will wish you Happy Holidays.  How many people dared to wish you a Happy National Coffee Day? We rest our case.  No, no we don’t: we’re just getting started here. 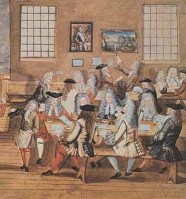 It’s more of the same, the never-ending assault from secular progressives on traditional American values, and most important thing in the country today (maybe a close second to the war on terror).  At stake: whether the USA, with its long tradition of National Coffee Day, so intimately tied to our set-in-stone Constitution, will turn into a mirror of pathetic National Coffee Day-free countries on which God has not bestowed His blessing, or maintain its  traditional coffee-loving values.  And the stakes could hardly be higher.

Just look at Western Europe and Canada, which don’t have National Coffee Days: there they are, swilling in secular progressive programs, the legalization of narcotics, euthanasia, naked beaches, failing banks, marriage between cats and dogs.  Just look at Holland, known for its legalized prostitution and streets paved with reefer, whose “coffeeshops” do not specialize in pumpkin spice lattes.  Be warned, citizens: lose National Coffee Day, and your beloved Panera might exchange its Napa Almond Chicken Salad Sandwich for a pile of doobies.

Conservative American coffee values are under siege.  America is a coffee nation, and statistics cherry-picked (or perhaps coffee-bean-picked) from varying sources prove it: 80% of Americans drink coffee (fact!) while only 78% planned to watch the Superbowl in 2011 (fact!), 39% of households own dogs (fact!), 70% go to college (fact!), 56.8% voted in the 2008 presidential election (fact!),  53.3% watched the “Who Shot J.R.” episode (fact!) and 74% believe in life after death (fact!).  That makes coffee-drinking Americans–245,605,240 strong!–the single most important majority in American life, and the liberal plot hatched by a progressive minority against them, played out in shopping malls, schools and public parks is patently offensive to Real America.

Coffee-drinking Americans, it’s time to take a stand.  Embrace your righteous rage and don’t sit by quietly while your cherished holiday is being denigrated and disrespected by hostile forces of the secular progressive non-National Coffee Day agenda.  Don’t support retailers who have knocked the word “coffee” out of Coffee Day.  Take your children out of schools that don’t have coffee-themed programming.  Picket your city government until they agree to Juan Valdez displays on public grounds.

The battle lines are drawn.  You’re with us or against us.  Which is it, punk?