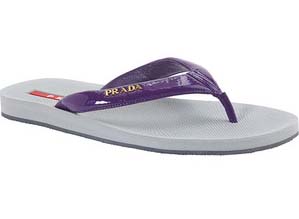 The following is a public service announcement, a call for a new public health initiative, an identification of a public nuisance, a diatribe against a foul practice that has invaded our schools, our churches, even our most esteemed halls of power.  It is a pestilence, and like many plagues, arrives in the warm weather: flip flops.

zōri and tabis (the only acceptable socks-and-sandals combination, unless your name has an umlaut or one of these in it: Ø)

Flip flops are the crummy descendents of much nobler ancestors.  They derive ultimately from the Japanese zōri, the traditional sandal made with a base of tatami mats and a thong of leather, brocade or silk.  They are worn over cotton socks called tabis, designed to accommodate the thong in between the toes. Zōri facilitate the tradition of quickly removing shoes upon entering a house, and allow wearers a similar sensation of walking on tatami-mat platforms as well as tatami mats themselves. These shoes could be the simple footwear for everyday clothes or, in their elevated version (geta), the elegant accompaniment of fine kimonos, and in part account for the tiny sliding steps taken by geisha.

By 1930, zōri were on the decline towards their ignominious later history in which the shuffling geisha swishing through a tea house is replaced by the slap of a sorority girl’s stomp through the mall.  New Zealanders (who should really stick to exporting products like Crowded House and Xena) adopted the woven sandals as beachwear.  Their evolution to the plastic stepchild of today is debated (and why anyone would want to claim this distinction—or the credit for, say, telemarketing, garden gnomes, Soviet anti-tank dogs or instant coffee—is a mystery), but likely occurred in the 1950s.  Of course it was only a matter of time before Americans embraced this new footwear option as the dandy marriage of Yankee convenience and affection for petroleum-based products.

Had flip flops stayed in those settings in which they were first employed, Taste would have no great complaint.  They are a pragmatic choice for negotiating a sandy beach and not messing up one’s more legitimate summer footwear.  They are a lighter alternative to Wellies for trips to the herb garden (and more justifiable if one’s garden is less than, say, 100 fathoms from the villa.)  They also make great sense in public pool and bathing establishments for keeping one’s foot cooties to one’s self, and for avoiding the adoption of others’ cooties.  (Taste is not sure why people go to these places, but as they do, Taste wants you to be careful with those foot cooties.)

But that’s it.  There is no other place where flip flops are suitable among polite society, for they are the very sign and symbol of all things tasteless.  They serve only the ease (not necessarily comfort, even) of the wearer, which makes them categorically impolite.  Footwear may be a pragmatic necessity but it is also an opportunity—as all clothes are—to engage or to affront.  The degree to which the latter is the case with flip flops was seen a few years ago when Northwestern University’s national championship women’s lacrosse team  (seen at left) sparked a huge public outcry by arriving at the White House shod in flops.  Lucky that you girls have sports or whatever, since in the Championship of Good Taste, it does not appear that you got game.  Except for slippers, there is no easier footwear than a flip flop, and taking the easy way out is never the tasteful option.  Flip flops are to footwear as sweatpants are to a Savile Row suit, as Ikea is to Samuel McIntire, as Dinty Moore canned stew is to Boeuf Bourguignon, as “URAQT” is to “all that’s best of dark and bright/Meet in her aspect and her eyes.”  They proclaim: I just do not care . . . about anything except . . . conserving my exceptionally low level of energy.

In addition, functionally, flip flops are just silly.  Whereas the original, natural-fiber Japanese version wicks moisture and ventilates the foot (helped along with those cotton socks), plastics are nasty near the skin: they are uncomfortable and unhygienic, turning footwear into Petri dishes full of foot germs.  They do little to protect the feet from dirt, rough surfaces and sharp objects.

$1,800: purchase power for one pair from Crystalishious or 600 pairs of flip flops from Walgreens

But worse yet, they are ugly.  It is true that otherwise admirable designers have been able to dress them up and make them more presentable (although we believe that Prada shoe at the top of the page pretty much phoned it in).  Even when ‘designed’ by ‘designers,’ they remain flip flops: even $1,797 worth of crystals cannot convincingly upgrade what is a $3 pair of shoes.  Seriously, if one is going to splash out on a haute designer, shouldn’t it be on hauteness that does not simulate a product that could be purchased at Walgreens?

What the drug store and designer shop versions have in common, at the end of the day, and this is where the flip flop goes really wrong, is that a foot will be put into them, and left exposed.  Feet are not pretty; it is the triumph of a well-designed shoe to enhance and beautify the stumps of bone, muscle and skin that bear our weight all day long.  John Lobb’s Oxford, Manolo Blahnik’s pump: both triumphs of the cobbler’s art.

Even worse than the way flip flops put feet on display when they are worn, most of those flip-flopped feet will find their way out of the shoes in public, as flip-flop wearers all too often slip out of them, as if this is somehow acceptable or forgivable.  It is not.  Rare indeed is the foot that is pretty, impeccably clean (especially within five minutes of walking outside in such shoes), well manicured, hairless and buffed enough, to be presentable virtually naked.  Feet are just ugly.  Even women’s feet, which are a zillion times more acceptable than men’s feet,  are ugly and are best at least partially covered.  Men’s feet should always, at every moment of the day, be covered.  This is a law of nature, of physics, of humanity.  Aristotle dedicated a lengthy section of the tragedy section of the Poetics to the subject of men’s feet.  It’s true.

As summer approaches, Taste makes a final plea to restore dignity to warm-weather footwear.  Gentlemen: forget about sandals; stick to the topsiders and sneakers, thank you.  If you are the kind of guy who can pull off a man-bag (to which we say, well done, sir), you may wear espadrilles.  Ladies: think fabric ballet flats, gladiator sandals, and above all, indulge in one of the great gifts to the world from Catalonia, where they know a thing or two about being stylish and tasteful when it’s hot: the sling back peep toe espadrille wedge.  Magnífico! 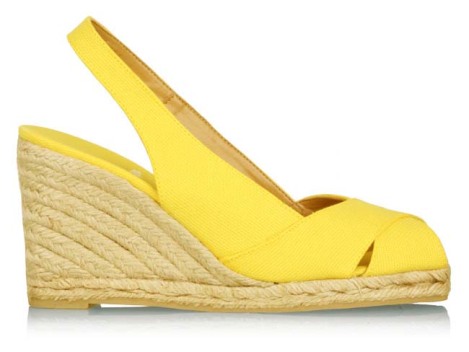 yes, and in every color

And please, if you are over the age of eight, do not even ask about those ‘jelly’ travesties.

no, never. not even in purple. no.