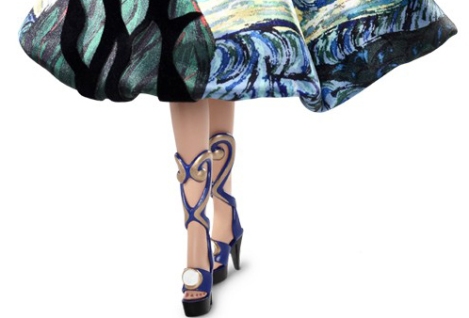 What was “Starry Night” missing? A perfect pedi, duh!

MoT staff entered their adult years at a point of truce with Barbie®.  We’ve healed the childhood scarring of the Unachievable Barbie Figure®, and overcome the aesthetic damage wrought to our architectural sensibilities by Barbie’s Dream House®.  We went our way, Barbie® went hers.  Or so we thought.  Had Barbie® remained in her rightful place in her Stepford Wifesque alternate universe, we would never had said a word.  Then Architect Barbie® was foisted upon us, and we had no choice but to respond.  And now, what fresh hell is this?  It’s Museum Collection Barbie®, here to aggravate us in all new ways.

It’s one thing to do a stupid cartoonish interpretation of women in a profession which is historically unsupportive of its female minority as a glib marketing ploy dressed up as some kind of grrl-power actuator; it’s another thing to blaspheme three treasures of art history.  We are not amused.

Museum Collection Barbie® is the brainchild of Mattel® designer Linda Kyaw®, whose career appears to be based on watering down and stealing (oops, we mean “adapting”) the work of actual artists.  This series of three dolls “inspired by” the work of Leonardo da Vinci, Vincent Van Gogh and Gustav Klimt is the worst kind of re-heated schmuck.  What was the inspiration, besides some memo from a CEO hoping someone would breathe some life into this horrifyingly outdated brand?  According to the giddy writeup on “Barbie Collector,” Ms. Kyaw® “wanted to do something different.”  Well of course.  So where does “different” start?  We suppose, the difference is, instead of looking to dune buggies and malt shops for inspiration, she looked to “the most iconic paintings of all time.”  Well of course!  Oh wait, here’s the twist: “with an emphasis on fashion.”

That’s definitely what we also learned in Art History 101: art is about fashion, especially if a lady is in the picture, cuz ladies are there to wear pretty clothes.  Or, at least, maybe that’s what we would have learned if we had cut most of our Art History 101 classes to go to the mall.

If that was the case, we too might be more open to the fluffy treatment of, say, Leonardo da Vinci, one of the greatest creative and inventive minds ever in the history of the universe.  Speculation about the identity and meaning of his most famous and enigmatic portrait, commonly known as Mona Lisa (ostensibly the inspiration for ye olde damsel doll, but you be the judge), has prompted untold hours of conversation in graduate seminars and countless thesis pages.  But it poses only one question to Ms. Kyaw®: what’s she wearing on her legs?  That is the mystery posed by the Mona Lisa: no one knows what’s she’s wearing below the waist!  Could it be goucho pants?  A hot mini?  Capri pants?  Jeggings?  oh please let it be jeggings!!!  Alas, no, it’s just the big skirt of a big dress that makes Mona Lisa Barbie® appear to be all decked out to serve mead at the Renaissance Faire.  To the credit of painter Ei Fong, at least she is not made up as if she just got her free Urban Decay Makeover at Ulta, like most Barbies®.  But that’s the best we can say for her.  Come on: even Dan Brown‘s goofball treatment of Leonardo’s art is more intellectually stimulating than this.  Next!

The second Museum Barbie® Barbie® actually did call for interpretation, since there is no pretty lady in Iconic Painting Number Two: Vincent Van Gogh’s Starry Night of 1889.  What’s the challenge for Ms. Kyaw® here?  It could have been an interesting study on the trope of the woman’s body as landscape, or something to do with an interpretation of Van Gogh’s stunning brushwork.  But no: it’s an effort to make this masterpiece of Post-Impressionism “trendy” and “to fuse the original painting with an edgy dynamic.”  Because nothing honors the memory of a tragic genius (and probable suicide who suffered epilepsy, delusions and various psychoses) like an edgy dynamic.  What form does this trendy edginess take?  Starry Night Barbie® gets a twirly circle skirt that swirls around, get it, like the swirly sky in the painting.  Get it?!?!?  And then that hard part again, with the legs sticking out under the place where the frame would have been.  Oh I know, swirly shoes!  And her Barbie Blonde® hair is all curly-swirly too!  And an inexplicable black crud crawls up her dress like sea weed or something?  Wait: a sea metaphor?  I thought we were looking at the sky?  Maybe that’s part of the edgy dynamic as well.  If Van Gogh was alive today, perhaps he’d take that knife that he used to whack off his left ear and gouge out his eyes to save himself from seeing this nightmare.  Oh that’s it, let’s call it Starry Nightmare!  Oh, you guyz, that’s so mean!

And then there’s the third one, from just a few years after the Van Gogh, since apparently Barbie’s® Barbie Art History® knows nothing before the Renaissance, and the sixteenth through nineteenth centuries are like so boring, and then the greater part of the twentieth century would be just too hard to figure out!  😦  So here is Gustav Klimt’s first Portrait of Adele Bloch-Bauer.  Thank goodness, another lady in a pretty dress.  Not only is she a pretty dress, it’s a sparkley dress, and she has a nutty hair-do that pretty much means the doll designs herself!  (That’s so awesome, since it must have been exhausting to work out that Starry Nightmare dress and shoes.)

Oh but here’s the weird thing, that Adele lady was a real lady.  A Jewish lady in Austria.  (Could this be the first Jewish Barbie®?  Who missed that marketing opportunity?)  This is where it gets a little weird if you bother to look into the actual, what’s the word, biography.  Mae West, Marilyn Monroe, maybe even eventually Katy Perry (oh you know she’s dreaming of it) sort of put themselves out there as characters that are amenable to the glamour-doll treatment.  But Adele isn’t like that.  Adele died young, in 1925, which means she at least didn’t have to witness the nastiness with the Nazis.  She died with the wish that her paintings (this and another portrait by Klimt, and three Klimt landscapes) would become available to the public, specifically the public in Vienna.  But her husband had to flee the Nazis, and like so much art during that period, ownership of Adele’s things was confused and contested, and it took significant work by lots of people for the rightful heirs to get their art back . . . so that they could take it to America, celebrate capitalism, and sell them for bajillions.  (Adele’s famous portrait went for $135 million, the highest price paid at that time for a single painting; it is on view in New York at the fabulous Neue Galerie; the others are in the hands of private collectors.)  Klimt’s Adele 1 is more than a fancy lady in a pretty golden dress.  It’s the centerpiece of a story of real artistry and political chaos, the rights an responsibilites of governments and individuals to the public, and as explained in this good article, “justice and redemption after the Holocaust” as well as “another tale of the crazy, intoxicating art market.”

Setting aside the tragedy and sadness of its historical context, the story of Adele’s portrait is a story of ownership.  Ultimately, who owns art?  Who has rights to its inspiration? Where is the line between homage and plagiarism? Or respectful deference and cheap knock-off?  The three paintings featured here have withstood time, critics, war and changing tastes to emerge as major landmarks in western art.  Their reward: a broader audience than they were first created for, some of that gained through cheap reproductions on tote bags, t-shirts, coffee mugs.  At least, most of the time, such reproductions are relatively true to portraying the original, and one might hope, raise some cash to support the museum that houses the thing.  At best, they inspire contemporary artists to do something new, in that competitive spirit that has moved art along since Knossos.  At worst, they are bastardized into flagrant commercial enterprise with no redeeming value above and beyond pop culture, which has plenty of other shallow pools to drink from.  At the very worst, they glamorize a noble remnant of tragic history at the national and personal levels.  These dolls represent neither imaginative play nor clever collector activity.  If Barbie® is going to venture into the land of art history, she ought to get at least one of those things right.  But her art is lazy, and her history is shameful.