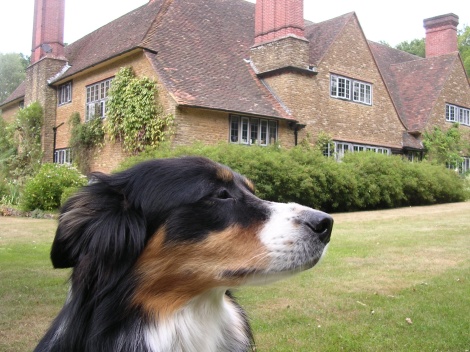 The identification of dogs as “man’s best friend” is not just a homespun adage.  It’s fact, argued before the Missouri Supreme Court and acknowledged by all the best blogs in the universe.  But like the Missouri case in which the phrase was apparently coined, this notion could be construed as being peculiarly American and of recent date.  Ce n’est pas alors, mon ami! The special connection between dogs and people goes way back to humankind’s earliest days (National Geographic says so).  Indeed, it may have been the presence of the dog that assisted the nurturing of early man’s generosity, kindliness and faithfulness that now are some of the most admirable traits among humankind. 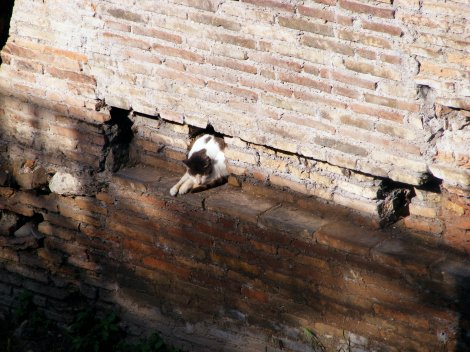 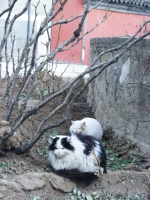 It sure wasn’t the other animal welcomed into a primitive hut eons ago by some confused homo sapien (probably some subject under the ancient Egyptian Empire) (and you can see how well domesticating cats worked out for them).  Cats exist for their own satisfaction, at the expense of the comfort of others, the hygiene of kitchen counters, the cleanliness of the sofa, and the longevity of pashmina shawls.  Sure, they sit around looking somewhat pretty, but that’s it.  They sit around.  All around the world.  They camp out in ancient ruins and wear down the plantings in Beijing parks, turning Roman temples and Qing Dynasty palaces into giant, glorious litter boxes.  No less filthy and bothersome than pigeons, cats do not even have the decency of their feathered friends to allow themselves to be shooed away.  Once they’re planted, they are part of the scenery, and they are not moving for you, homo stupidus.  No way.  Not tasty. 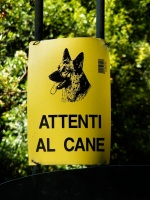 translation: "whoopee, there are dogs here!"

On the other hand, dogs are globally revered for their contributions to society.  Dogs’ ability to make connections with others and always look out for the good of the group is a cornerstone of civilization and at the heart of taste. Americans know this but can find ample evidence of the supremacy of dogs as the quadruped world’s greatest expositors of taste by looking abroad. Many tasty nations have a great dog culture, and like their ability to brew coffee, design cars, and provide adequate child care for working parents, many of those far exceed America’s example.

In contrast to their feline fellows, Roman dogs do not loll about the antiquities like so many tiny, furry self-entitled Neros deserving of the choicest pleasures and luxuries of a long-lost empire.  (Those Roman kitties don’t purr so much as whine, “Slave, peel me a mouse.”)  Roman dogs are an active part of the city’s culture, be it window shopping on the Via Condotti, sipping cappuccino at cafés or strolling through piazzas searching out the best gelato–so they can share it with their people.  Deeply invested in the city’s heritage, they enjoy dedicated off-leash parks strewn along the length of aqueducts.  Whereas cats see such a structure as a thermal mass provided for their own sleepy-time comfort, the dogs of Rome understand they are part of but one generation to enjoy the Eternal City, and enjoy it they do–as long as their two-legged friends come along to play, also. 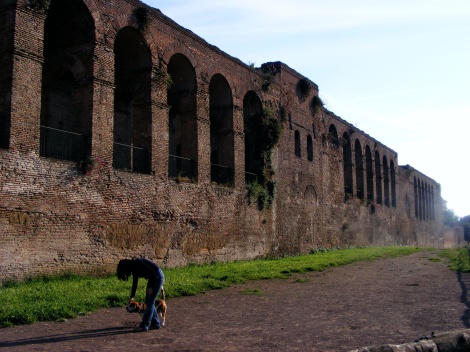 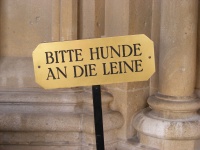 translation: "whoopee, there are dogs here!"

Not only in Italia do i cani di gusto reside.  To the north, Viennese citizens waltz their dogs through the streets of their capital with Straussian grace.  Lest anyone forget, polite reminders are placed here and there to keep order in this most well-ordered of societies.  Yes, please keep your dog on a leash, but he’s welcome to stroll through über-chic galleries with you.  Perhaps if American dogs had such elegant environments at their disposal (as compared with, say, dryvit-clad big-box retailers like Petsmart), they would also form string quartets like these debonaire doggies of the Danube.  Or at least be less likely to pee on the floor. 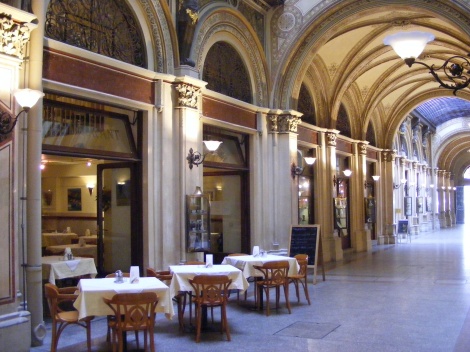 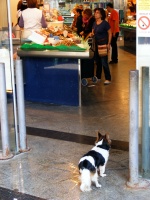 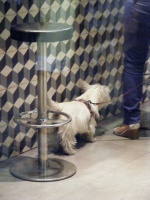 Merrier with the terrier: tapas bar in Granada

Perhaps the greatest dog culture in Europe exists in Spain, where dogs are the pimentón in the paella of public life.  They’re ubiquitous yet so subtle you might not notice them until they are missing.  They are well-mannered, patient, and as seen in the near left image, always dress to match their señora’s espadrilles.

Spanish dogs’ ability to ignore the indulgence of personal gratification is stunningly impressive.  Just look at the little perro to the far left, on the threshold of a huge food market, with no leash.  Just hanging out, waiting for his señora to return, maybe with a nice Jamón serrano biscuit (hueso de leche in the local tongue).  But until she does return, he will . . . not . . . move.

Everywhere else, dogs are just walking around with people–on the streets, outside of churches, in the piazzas, wandering through the Alhambra for crying out loud–completely unphased by the abundant food that is constantly spilling out of markets and restaurants.  How many American dogs can manage to stay put in a kitchen when dinner’s being prepared, let alone just chill in the midst of a huge market gorged with open-air restaurants whose counters are laden with bite-sized (two bites for people, one bite for poochie) tapas? 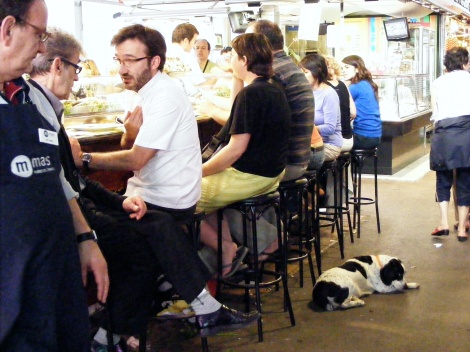 5 thoughts on “dogs of the world”